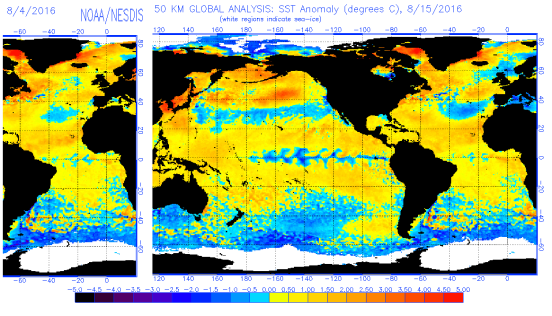 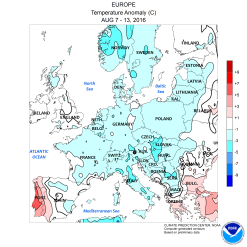 Sea temperatures by early August had risen with the cold anomaly in the North Atlantic much reduced but by the 15th cooler than normal sea temperature had returned to waters around Scotland.

The colder temperatures in the Mediterranean seems strange but may be linked to colder air that pushed south over Europe bringing cooler than normal temperatures to many areas. Despite sunny days night time cooling is probably responsible.

In the top graphic the fairly weak La Nina can be seen in the Pacific. The La Nina is likely to last into the start of the winter but there is less agreement after this.

Some differences between ECMWF, UKMO and NCEP are shown for the NINO3.4 area. 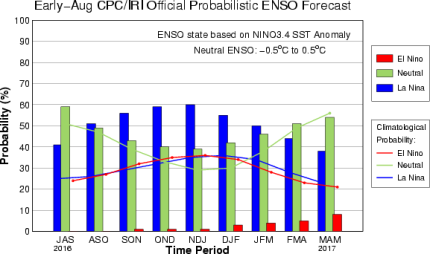 Overall a return to neutral conditions during the winds of 2016/17 seems to be the consensus in the early August CPC/IRI probability forecast for Nino 3.4.

A consequence of  this consensus is that any statistical relationship between La Nino and UK rainfall becomes even more unreliable during the winter. The graphics below show this relationship for the Autumn and Winter.

The suggestion of a drier than normal Autumn in parts of England and Wales is reflected in some  of the model output bu the La Nina is fairly week so this may not be reliable.

For the winter period La Nina conditions may be even weaker or trending to neutral conditions with uncertain impact. Hence the relationships shown by the graphic are even less reliable than normal.

A text summary of several seasonal model outputs can be seen in the UK and Eire summary at www.weatherservice.co.uk

200hPa heights are predicted by CFS2 and NMME to be above normal but hints at slightly enhanced zonal pattern in September and November. This is a change from last month when October rather than November had stronger zonality. 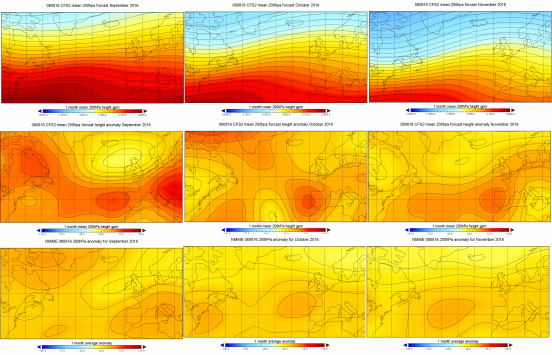 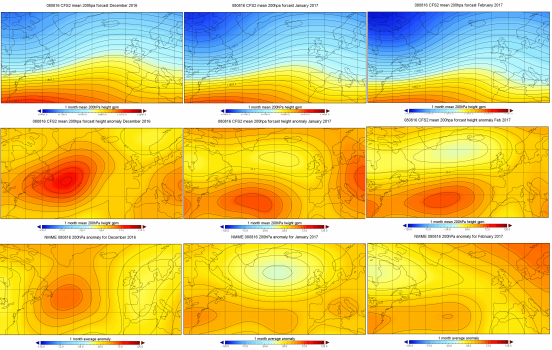 Some indication of above normal heights but also increased Jet flow across the Atlantic during Jan and possibly also Feb though this is less noticeable in the NMME output.

Looking at the NMME output for temperature and rainfall, shown below, it can be seen that above normal temperatures are predicted although the anomalies are small until later in the winter. Precipitation is less clear cut although the NW of UK and parts of Eire  look more likely to see above normal precipitation this is less clear elsewhere. For SW England 4 out of 6 months show up as below normal. 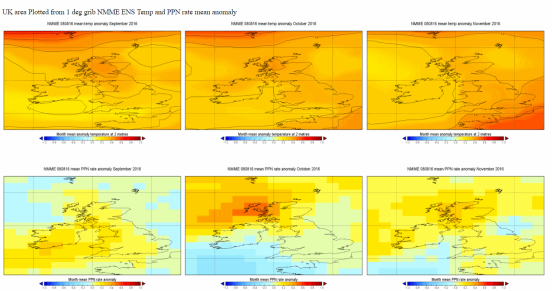 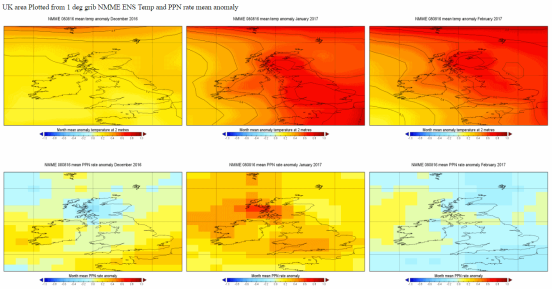 There is some support from other models for below normal precipitation in the S of the UK for periods in the Autumn and perhaps early December but also hints at some much wetter months. Previous indications of a wet start to winter and a less wet Feb seems to have been push back to see a wetter than normal period starting later in December and lasting into February. Month to month detail often proves unreliable with regards precipitation.

Rainfall probably near normal or a little below normal for the season as a whole especially in eastern parts of the region. September possibly near or slightly above normal, October possibly drier than normal but with a wetter than normal November at least in Cornwall, N and W Devon but perhaps not in SE and E parts of the Region.

A mild winter is most likely (does not rule out some frost), although early December may see temperatures closer to normal. In January temperatures probably well above normal on average with February near normal or above normal.

Near normal or above normal rainfall across the SW is most likely for the season as a whole, especially in the N and W but with a chance that SE and E parts of Devon and Dorset might be a little drier than normal for periods in December and possibly February too. During parts of January and / or February, however, above normal precipitation totals may occur generally across the Region. Below normal snowfall is more likely than above normal which means just a little snow accumulation over the moors but not much elsewhere.

The attempt at a Regional Forecast for SW England aims to test whether such a forecast of temperature and rainfall variation from average can be made using numerical model data available on the internet. The forecast should not be used for any other purpose. A brief verification summary for the UK and Eire is routinely published at http://www.weather-info.co.uk/wxsvc/Verification.html