The sea temperature has warmed near and to the southwest of the UK as well as in the Mediterranean. Much of the North Atlantic has cooled, probably due to mixing of the surface layers due to large deep low pressure areas during June as shown in the composite of analysis for June to date. The colder North Atlantic sea temperatures increases the risk of cooler temperatures this summer with winds from the NW but winds from other directions flow over warmer than normal seas.

The risk of a developing El Nino looks to have reduced as shown by the CFS SST forecast for Nino 3.4 location in the Pacific. El Nino typically acts to reduce Atlantic Hurricanes hence this effect is not likely for the coming season. Tropical Atlantic temperatures are above normal as shown by the UKMO graphic below.

The North Atlantic Oscillation (shown by a 500hPa index in the image below) went negative during May but has since return to a positive phase. See Met Office NAO information.

A: Rainfall during May was again below normal across much of SW England but not everywhere with parts of south Devon not far from normal. River flows and groundwater in the region are below normal – for more details, see the Hydrological Summary –  May 2017 summary PDF

June so far has seen rather mixed rainfall with period of heavy rain in the first third of the month followed by a dry period around the middle of the month and what looks like a wetter end to June. Following a “dry” winter and Spring reservoir levels remain below normal for the time of year and also below the 1995 drought levels. Water storage is much greater than during the 1980’s when significant water saving measures came into play and there has been a slight reduction in the deficit early in June.  For reservoir details see SW Water web site.

200hPa heights are forecast to be above normal although in August the NCAR anomaly suggest at least some risk of more troughing. 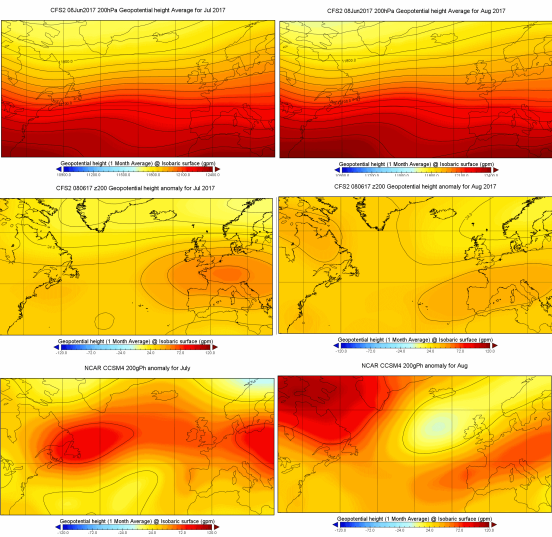 200hpa  CFS2 July and August mean and anomaly with lower images being the NCAR anomaly.

Although all models agree on normal or above normal temperatures (mostly forecast above), for the summer and autumn, rainfall predictions are not so reliable.

NMME data suggest wetter periods for SW England in September and perhaps in November but overall indicates a continuation of the drier than normal types. A note of caution is required because model resolutions prevent the forecasting of smaller scale rainfall for example showers and thunderstorms. Consequently the drier types may be indicative of less wet days in a month rather than total rainfall. The sample CFS2 shown below indicates a wetter October in the SW for example.

Models overall had a good idea that temperature would be above normal but rainfall forecasts where not good with little signal for a very dry April and May which was wetter in the SE third of UK but drier elsewhere. An example of  forecast reliability is shown below with the March April and May temperature and rainfall anomalies compared to the Copernicus multi model ensemble forecast based on data in February 2017 data. 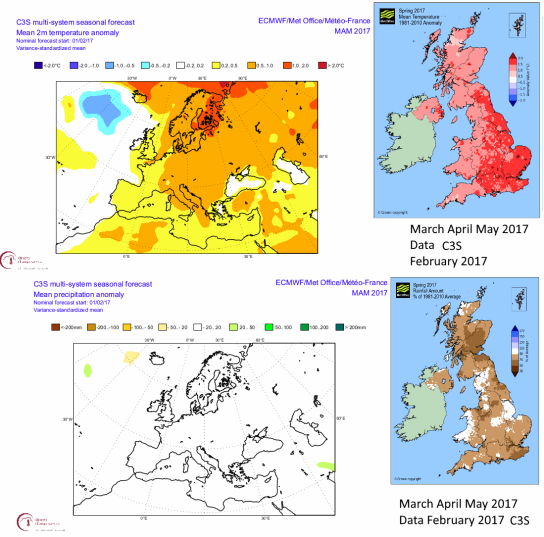 Above normal temperatures are most likely and possibly well above normal values. There is a risk that Easterly winds may be more frequent than normal, due to higher than normal pressure over and to the north of the UK.

After and unsettled start to July probably becoming drier than average in terms of number of dry days and possibly also rain total. August may be also drier than normal but perhaps modified by shower/thunderstorm risk which can bring locally high rain totals but not for the whole region.

Summer climate: 1981 to 2010 average daily mean temperature 14 or 15°C in many areas to 16 or 17°C in main urban areas also locally east of the moors and more widely in Somerset. Maximum temperatures average 19 to over 21°C in similar areas. July often warmer than August. Average 1981 to 2010 rain in July typically 60 to 80mm, but 40 to 60mm in places especially East of the moors and in Somerset. Locally over 100mm across the moors. August slightly small areas with the lower rain totals due to July often being drier than August.

Consistent indication for a warmer/milder than normal season. Possibly well above normal for September and October but perhaps less so in November.

Rainfall probably near normal overall but above normal in September and perhaps November. October probably near or below normal rainfall.

Probably windier than typical and rainfall is likely to be above normal for the season. Snow risk mainly late December then little if any snow, except perhaps over the moors.