El Nino is expected to remain in a neutral phase as shown in the CFS2 and NMME ensemble forecast below. A developing  El Nino typically acts to reduce Atlantic Hurricanes hence this effect is not likely for the coming season.

Tropical Atlantic temperatures are above normal as shown by the UKMO graphic below and the North Atlantic Oscillation (shown by a 500hPa index in the image below) turned positive in June and has more or less remained in a positive phase. See Met Office NAO information. 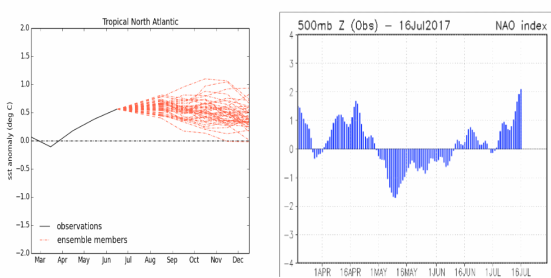 A: Rainfall during June was above normal across much of SW England but this has not made up for the deficit from previous months. 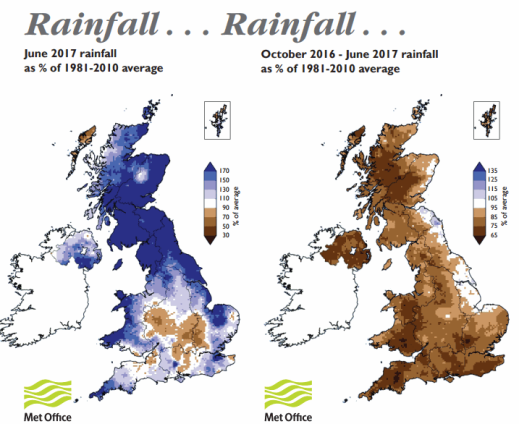 In addition most of the rain in June fell on just two days and reservoir water levels remain below average. River flows and groundwater in the region show mixed results with moorland rivers showing increased flow as can be seen in the Hydrological Summary –  June 2017 summary PDF

There is some agreement between models that pressure in the south of England may be above average through the Autumn. Average monthly 200hPa heights are forecast to be above normal right through until February in the CFS 2 data.

NMME data continues to indicate strong positive temperature anomalies through the remainder of summer, into Autumn and through winter. There is good agreement between most available models that temperatures will be above average through winter.

Copernicus and CFS2 three month means differ in the temperature anomaly and rainfall but this may be due to smaller anomalies during this period.

Rainfall forecasts are the least reliable (as shown in the verification section below) but the strongest anomalies for the Autumn are in September and October. For the winter there is a strong signal for an unusually mild and wet season across much of the UK. 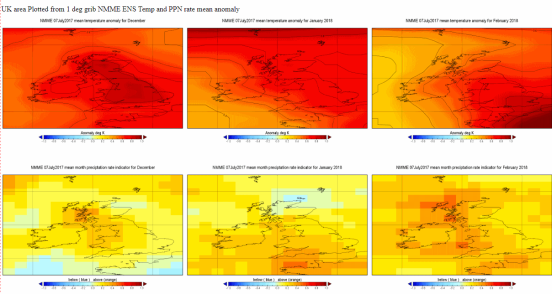 The image above shows June rainfall anomalies based on forecast data available in March April and May and the associated observed anomalies (right) in CPC and Met Office data. The most recent 3 month verification is available at this link.

Above normal temperatures are most likely though perhaps not averaging out with a large anomaly. There is a chance that Easterly winds may be more frequent than normal, due to higher than normal pressure over the UK. Probably drier than normal, reduced number of wet days if not rain total. Rain total may be modified by shower/thunderstorm risk which can bring locally high rain totals but not for the whole region.

There remains a consistent indication for a warmer/milder than normal season. Possibly well above normal in October but perhaps only slightly above normal in other months.

Rainfall probably near normal or a little below normal for the season but the month to month detail is inconsistent and at least one month may be see above normal rain. The trend is for increasing rainfall later in the Autumn.

A mild or very mild winter is likely which does not rule out some colder spells. Individual station plots indicate brief cold snaps in late December and again in January and February. February may be slightly less mild than the other months, compared to average.

Probably windier than typical and rainfall is likely to be above normal for the season. Snow risk reduced compared to average, mainly in late December then little if any snow, except perhaps over the moors.