GDPR statement: Please note that the author of this blog does not set cookies but the host “wordpress.com” sets multiple cookies which are outside of the authors control. You can view their cookie policy here. 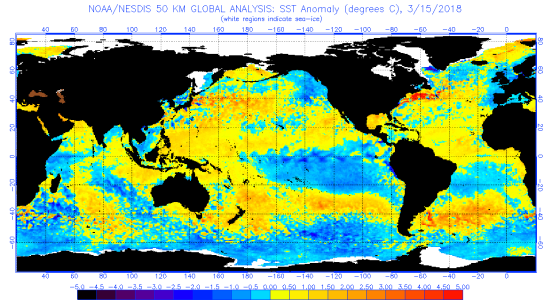 Sea Temperatures have cooled relative to average around the UK and western Europe due to the cold easterly types early and middle March know as the “Beast from the East” and “mini Breast from the East”, resulting partially from the sudden stratospheric warming during February. This is likely to have impact on temperatures across the UK during the remainder of  March and at least for the start of April. Elsewhere the anomalies are not very different to last month with North Atlantic anomalies still above average. Sea temperatures in the tropical Atlantic area have continued to cool and are forecast remain slightly below average for the next few months as shown by the UK Met Office plot below.

The La Nina in the Pacific is well established (as shown by the sea temperature anomaly chart at the top of the page) with a large area of below normal sea temperatures in the eastern Pacific near the equator. The CFS2 forecast for the La Nina suggests it may continue as a weak feature through summer and autumn, as shown by the graphic below (top right panel). This is not supported by either UKMO or ECMWF forecast which trends to neutral or El Nino conditions. A consensus appears to be more towards the Neutral/El Nino than staying with a weak La Nina.

A consequence is that the IRI relationship between ENSO and UK rainfall is likely to be unreliable and is not reproduced in this document.

The North Atlantic Oscillation index (shown by a 500hPa index in the image below) went into a negative phase, as suggested by some models, late in February but may well return to a positive phase over the next few weeks.

Changes in the upper atmosphere.

A sudden stratospheric warming (SSW) did develop from about the 12th February leading to a reversal in the stratospheric winds over the UK area and a weakening of the jet stream across the Atlantic. Tokyo issued a STRATALERT EXISTS message and a final END message on the 16th March. ECMWF 30hPa chart for 12Z 11th February and 12Z on the 18th March 2018 shows the effect of the warming on the stratospheric polar vortex which is well on the way to “summer” mode. 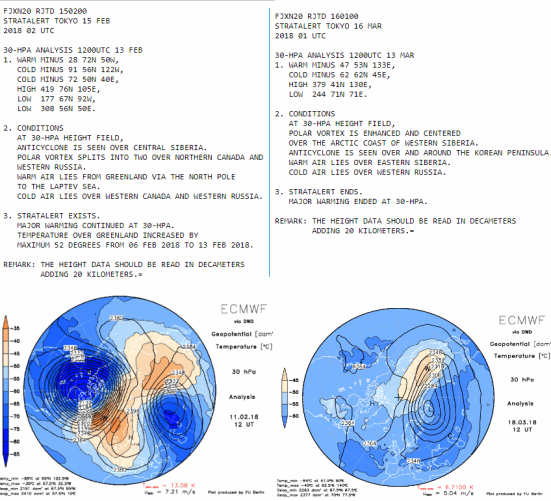 February was colder and drier than normal but for the winter as a whole temperatures in the south of UK were near average and for the SW rainfall was not far from normal though slightly wetter in the west and drier in parts of the SE of the region. March so far has continued with the cold theme with temperature anomalies over 1 degree below the average. Rainfall (snowmelt) looks to be well above normal in the west but less so in the east. 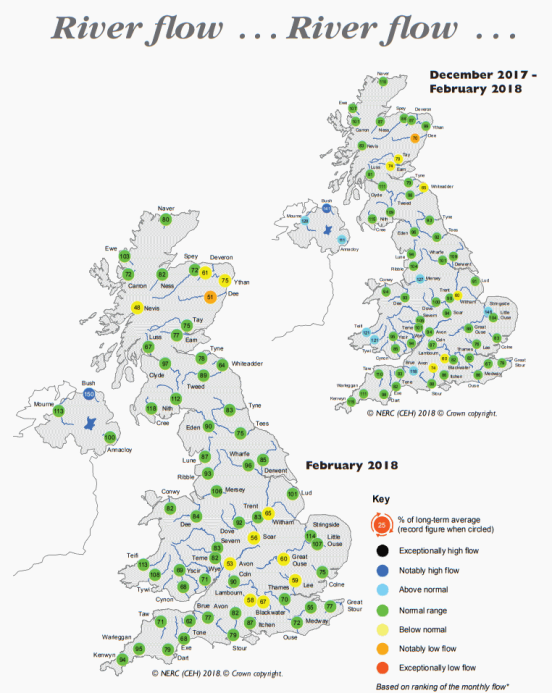 River flows for February reflect the drier month but have no doubt made up for it since as can be seen in the recent reservoir levels which indicate above normal storage for the time of year. The  full Hydrological Summary for February is available from this link  –  February 2018 summary PDF

Looking ahead, the experimental product from the Global Flood Awareness System suggests no enhanced flood risk, compared to the average risk, for the SW of England for the next 4 months. This is based on the early March monthly ECMWF seasonal forecast.

CFS2 forecast for 200hPa suggests above normal heights across the UK and possibly reduced jet strength through Spring  but again hints at increased troughing in summer.

Top row of each set, temperature anomaly (+ oranges). Lower row indication for above or below normal rainfall (reds are above normal in NMME and CFS2 but below normal in EC). The stronger dry signals in EC and NMME dont quite match but are clearly different to the wetter indication in the NCEP E3. There is good agreement for a colder April between NCEP and EC but not in the NMME output which tends to be a bit warm. (Note NCEP is a part of the NMME multi model ensemble).

Full size graphics and a text review of other models can be seen at www.weather-info.co.uk/wxsvc/seaslatest.html

Recent seasonal models that provide month by month data were slow to pick up on the cold spell in February more than a month ahead and certainly not before the start of the winter season.  Verification details can be viewed here

The plots above show a score out of three for the following three month forecast. ( Monthly score 0 no signal 1 poor 2 fair  and 3 good leading to a potential max of 36 for year)  This is done for each model/system for the season following the issue month. Temperature continues to be slightly better forecast than rainfall.

Temperatures may well start below normal in April but should recover to near normal and then above normal for May. The risk of air frosts continues into April, although probably not very frequent.

Rainfall probably below normal early April but then returning to normal with wetter spells for May especially in the west. Parts of the south and east of the region may well end up below normal for the the two months.  Snow is only likely on the tops of the moors for a time in April.

The temperature is most likely to be near or only very slightly above normal for the season. July may see larger anomalies than August.

Rainfall for the season is quite uncertain probably near or a little above the long term average but with a chance that July might be a little drier. Summer rainfall is often difficult due to showery nature leading to large variation in totals over the region. There is little agreement between the seasonal models with regards to which months might be wetter or drier.

Summer climate: 1981 to 2010 average daily mean temperature 14 or 15°C in many areas to 16 or 17°C in main urban areas also locally east of the moors and more widely in Somerset. Maximum temperatures average 19 to over 21°C in similar areas. July often warmer than August. Average 1981 to 2010 rain 300mm over the moors, typically 200 to 250mm in many coastal and eastern areas. June often drier than July and July drier than August.

Temperature likely to be above normal and rainfall mostly above normal for season possibly wettest in October.

Temperature normal or above normal with variable precipitation month to month but probably ending up near normal for the season.

Experimental Long Range Forecasts do not have a good success rate. The data used for the above forecast summary can be seen at  www.weatherservice.co.uk

‘Copernicus Products’  as listed in the C3S or CAMS Service Product Specification or any other items available through an ECMWF Copernicus  http://climate.copernicus.eu